War memorial on the canal bank at Eigenbilzen
During a silent commemmoration attended by the British RAF veteran Michael Pitt the crews were remembered that lost their lives on May the 12th 1940 on a mission to destroy the Albert Canal bridges. One of the crews crashed at Eigenbilzen.

Short history.
Already the next day bomber planes of the Belgian Air Force tried to destroy those bridges in order to stop the enemy advance but their actions were unsuccessful.

Already the next day bomber planes of the Belgian Air Force tried to destroy those bridges in order to stop the enemy advance but their actions were unsuccessful. On May the 12th five Fairey Battle bombers of No. 12 Squadron belonging to the British Expeditionary Force took off in Northern France. It was their mission to carry out a second attack against the two steel bridges at Vroenhoven and Eigenbilzen.

But in the past few days the Germans had installed numerous anti-aircraft batteries around the bridges so the British airplanes didn’t stand a chance. Only one bomber was able to return to its base after the mission. One of the planes that had been shot down was piloted by sergeant Fred Marland and crashed on the canal bank at Eigenbilzen near a place called the Heseputterstraat.

All three crew members died in the crash :

The Fairey Battle Mk.I marked L5227 was burnt out and salvaged by the Germans. The three airmen were buried at the crash site and the next year a small memorial stone was set up under the eye of the occupuying forces. In November 1946 the bodies were exhumed and interred at the Heverlee War Cemetery.

In the late eighties the War Commemoration Society from the nearby village of Mopertingen discovered the old memorial stone and built a new brick memorial provided with a plaque mentioning the names of the fallen airmen at the exact spot of the crash. From 2007 on our society has taken the responsibility to embellish the site and provide an easy access prior to the annual commemoration on May the 12th. In 2009 an information board was placed explaining the historical events. 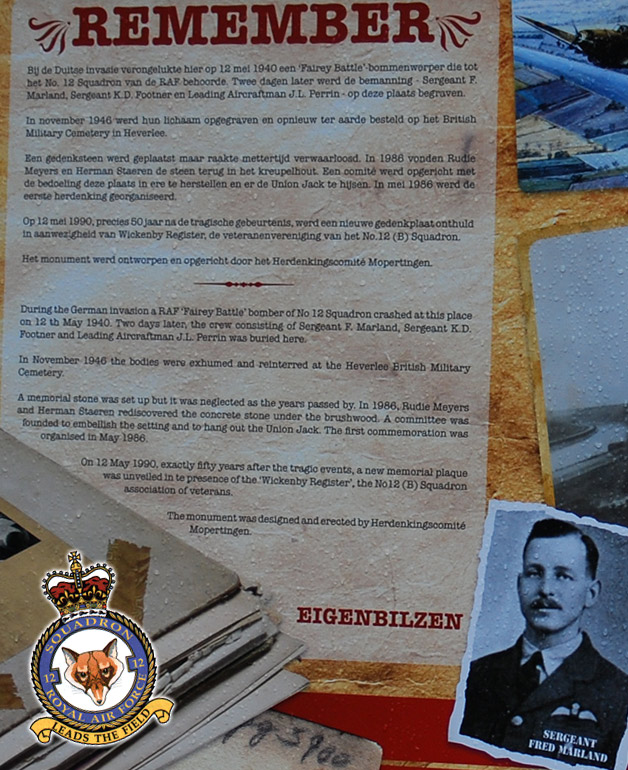